First of all a happy new year to all of you! 🙂

My year has started really cool, I made great progress after my disk surgery and could even participate in the World Cup.

After my first jumps at the beginning of December, I was really happy that our plan had worked out and I was able to put almost full weight on my body. In the following days until Christmas, I trained very hard and at the same time made sure that I didn’t overdo it. A few days after Christmas came the first test: I traveled to Engelberg with the Continental Cup Team.

There, I made another step forward and was able to make very stable jumps. I even finished the competition on Sunday on the podium, it couldn’t have gone any better up to that point. Now I was already able to think a little bit in the direction of the Four Hills Tournament.

Shortly after the surgery I could not predict when and how I would be back on the hill, but only a little later my coach Patrick and I had a plan, and there the goal “Bergisel” was at the top of the list. When I really made it the Bergisel on the 3rd of January, I could hardly believe that we really managed to do the almost impossible.

THANK YOU to everyone who helped me along the way!

At the qualifier that day, I still didn’t have a good body feeling and just missed the competition as 51st. Unfortunately the Bergisel jumping had to be cancelled due to wind, but so I had the possibility to start again at the replacement competition in Bischofshofen.
On my home hill it went much better. After the passed qualification, I could fully attack and jumped into the top 10! The most beautiful 9th place of my career!
The relief and joy I felt that day are indescribable. It’s just nice that the work and patience paid off. And I now know that I can perform well again in the World Cup. The next day I felt that I still have to manage my strength, so I am very satisfied with 22nd place.

After that it was back to training and stabilizing. Among other things, I did some jumps together with my buddy Stefan Kraft in Ramsau. This weekend I will be back in the World Cup, in Zakopane I will try to take the next step. And if there is something new to report, I will of course get back to you. 🙂

See you then
Michi

I’m back on the hill 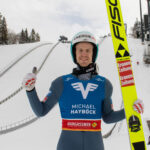 I really look forward to ski flying!
Scroll to top