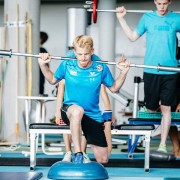 Three further training courses are done for the moment – Ramsau, Predazzo and Faak am See. Between these courses there was not much time to “rest” anyway Olympic season 2018 comes already closer and closer and I really look forward to the upcoming season and competitions.

Besides the training, there still was some time for golfing and the one or other hike with friends to enjoy nature and recharge batteries for the next challenges.

And then there is another exciting training course in Kuusamo on our schedule. After that I will begin to compete in the Sommer Grand Prix in Hinterzarten.

In the meantime I wish you some great summer days, 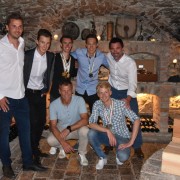 It is something very special every year to come together with the JumpandReach-family in Seefeld to spend three cool days together.

This year’s come-together was characterized by gold, silver, bronze and crystal. Krafti, Mario, Lis and I won not less than 8 world championship medals and at the for friends event we had a great opportunity to celebrate them in a great and familiar atmosphere.

In addition to that, Krafti added everything else with his overall crystal globe and his ski flying crystal globe to this very unique ambience. It was great to look back together in narrow circle to a very intensive but successful season.

A lot of trainings and training courses are now up but I’ll for sure keep you up to date,

Playing golf and haveing a chat with ski jumping colleagues from other nations beside the rush in the winter. This is what makes the Ski Jumpers’ Golf Trophy to something very special.

This year, I had again the honour to play with and against Andreas Stjernen. Andreas is a great golfer and it’s not easy for me to be able to keep up but all in all it was quite good golfing this day. I can learn a lot from Andreas’ golfing skills, for example how to hit a golf ball over 300 (!) meters :O But generally it was just a great day with friends!

Finally, Team Austria took the trophy for the fourth time in a row and although the Trophy is a fun thing, as a pro athlete as we all are, you can’t turn off the competitive thought 😉

The upcoming week is a training week for me and my team mates in Italy, in Predazzo. 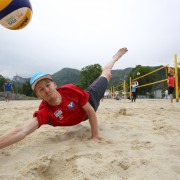 And what are ski jumpers doing? Training. Ok, at least a significant part of our time 😉 But less on the ski jumping hill than for example in the sand. At the moment there are other sports in our focus, like soccer, athletic sports or beach volleyball. A great balance and a cool alternation!

But also ski jumpers enjoy the current weather at the lake or with an ice cream in the city. For me of course, it’s golf time 😉 After a really nice charity golf tournament for the Acakoro Academy in Nairobi, we have our traditional Ski Jumpers’ Golf Trophy at the golf club Zillertal Uderns on our schedule. Misson: Titel defence 😉 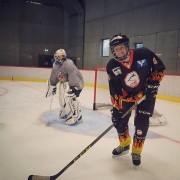 Ok, there are still more than 9 months to go, till the Olympic Winter Games in Pyeong Chang – but the Olympia Season has officially started.

After a short break, off from ski jumping and training, which I used for doing a lot of nice things – skiing with my family, spending time on the golf course, flightseeing with friends – the preparation for the new season has already begun. Besides our first small trainings course on the ice, we now are back in our daily training routine in Salzburg. 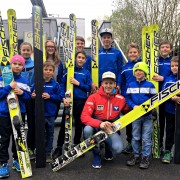 Also this year, my ski jumping club the UVB Hinzenbach, hold a great welcome party for me at the hill where once everything started. It was amazing how many people came by to congratulate me for the last season. I’m so very pleased to see that those people have so much fun with what I’m doing! Thanks a lot!!

Now I’ll go for skiing holidays with my family to enjoy the last winter days on the slopes. Very much looking forward to this. You know during the world cup season, we don’t have time for such things 😉 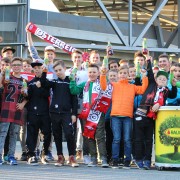 … there are other things in the focus than ski jumping. Last week we were at the friendly football match between Austria and Finland in Innsbruck – together with the kids of the JumpandReach “Young Athletes Support” project. A great evening with many kids and one goal of Marko Arnautovic 😉 It’s amazing to see, how much joy you can cause, just by watching a game with the kids and to pose for some photos and selfies. I really enjoy supporting this project.

Furthermore we had our yearly “JumpandReach Athletes Skiing Day” in Hochzillertal. As every year our traditional, small and also kind of “mental” ending of the winter season. Great weather, nice slopes, delicious food, great people – like always a really cool day!

This weekend I have two welcomes on my schedule. First at home in Hinzenbach, and then in Salzburg with the other ÖSV athletes. Surely two great evenings, on which you have the chance to say thanks to all the fans in person. 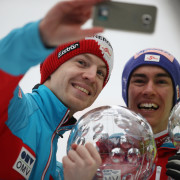 Again, an exciting and great season lies behind me! Again, a lot of new experiences and again, many new things learned!

But first: Dear Kraftl, Congrats for this amazing season!! It’s totally crazy what you performed during the last months! Cool, to have you as a roommate.

But I also look back at this season quite satisfied, although not everything worked out as planned. My back problems at the start of this season and the sickness during the Four Hills Tournament weren’t nice, but I guess that’s part of the deal.

But all that brought me further in some way.

Therfore I was able to stand on the top podium again, in a single competition and also in a team competition. Furthermore two medals in Lahti! We have such a great teamspirit! And 7th place in the overall world cup isn’t that bad either 😉

Nevertheless there is a lot to work on for next season.

But for now, my thoughts will not circle around ski jumping. A few days at home, soccer, skiing, welcomes. A lot of things, I’m looking forward to and for which I haven’t time during the world cup season.

Last but not least I want to say thanks to everyone, who was and is part of this journey!!! And thanks to all those great fans out there! It’s amazing how you support us throughout the whole season! Thanks! 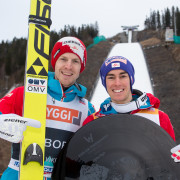 A very intense RawAir Tournament is over! Not everything worked out as planned, but the third place at the end in Vikersund in the ski flying competition was amazing! And also both team competitions were really great! It just works very fine at the moment for all of us!

Now I’m looking forward to Planica. There, I want to show again some great flights and then in April I will take same days off and relax.

And Kraftl: Hats off! You did win the RawAir Tournament and you extended our room record 😉 just kidding. Just congrats to the new world record!

So let’s bring this season to a great end! See you! 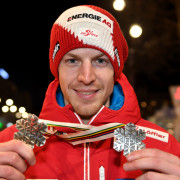 And Krafti: Congrats!! Unbelievable what you did in Lahti!!

The days at home were pretty nice. I was able to relax and to prepare myself for the next competitions in Norway.

Today we alreay continue with the first station of the new Rawair tournament. I’m very excited about how those next days will look like. Anyway I’m looking forward to all those competitions although they will be definitely not easy.