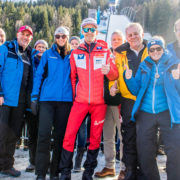 The ski flying at Kulm turned out as the spectacle everyone suspected it to be and the legendary hill was once more a real highlight of the season.

Right from the beginning I was “good friends” with the hill and could show jumps clearly over 200 meters. I was in the “flying mode” straight away and I could enjoy the atmosphere and the playing with the forces in the air – for me as a pilot, flying will always be an amazing feeling. On Friday, the qualification hat to be cancelled because of too much wind, but on the following day the conditions where a lot better and fair, so it really was a lot of fun.

On competition day one I was more than content with my flights on 215.5 and 224 meters and in the end rank 11 felt pretty good. On day two I wasn’t very pleased with my first jump on 215 meters. Round two was way better – but because of emerging winds it had to be cancelled, so only the first jump was counted for the result and I ended up as 23rd, but still with good feelings.

At the winners ceremony the Austrian national anthem was played for my roommate Krafti, who celebrated his first HOME VICTORY – Congrats Krafti, what a strong performance.

After collecting those “flight miles”, the next destination is Rasnov in Romania, where the 200 m flights will quickly turn into 90 m jumps because of the hill size of 97m.

Thanks again to all my friends, family and fans for the unbelievable support at the hill! 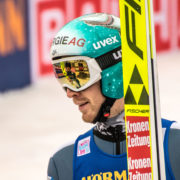 With the Kulm there is a highlight coming for us ski jumpers. On the one hand there is the fascination of ski flying and on the other hand the amazing atmosphere in front of the home crowd. So altogether, everything is there for a perfect ski flying weekend.

In my last competitions my jumps felt good and sometimes even very good, I could gain a lot of consistency and self-confidence. With the competitions in Zakopane, Sapporo and Willingen I came a lot closer to my season goal of consistently jumping into the top 20 – with three top 20 results and even one top 10 (8th place in Sapporo).

I am pleased, I feel fit and I am headed into the right direction. At Kulm I want to confirm my rising shape and further develop my flight system in order to become more stable and consistent. I’m sure the higher speed and the longer “air-time” will help me with that.

So keep your fingers crossed or best be on the site at Kulm and we will see us there,