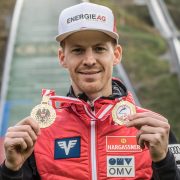 Only just were we looking forward to the upcoming Summer Grand Prix, the “fighting” against and with our ski jumping colleagues, the competition at home in Hinzenbach, followed by the Austrian championships and then the team regeneration in Cyprus. And now, a few weeks – which feels like only a few days – later, everything is already completed and the winter season is virtually just around the corner.

It was a good preseason for me in the last couple of weeks and month. I feel fit, my back doesn’t cause any problems so far and I am ready. The past training courses with the team were a lot of fun, we developed a good team spirit and the atmosphere within the team is really cool.

With the Austrian championships on the normal hill in Tschagguns, the first intern team comparison was on the schedule. I could show two quite solid jumps at not so easy conditions on the ice track and could defend my national champion’s title, which of course I’m still very pleased with. Unfortunately, this year there was no competition on the big hill due to heavy winds.

So our next destination – after two training days in Rif, Salzburg – was Cyprus for our yearly team regeneration camp. Soaking up some sun, mixed with a few strength training sessions at around 30 degrees is always something the whole team looks forward to and a little sun is definitely good before the World Cup start 😉

Back home, “freshly tanned” we suited up and attended the Austrian Sports Gala in Vienna together with the JumpandReach family. Now we continue with two training courses in Innsbruck and then there are only a few days left until the World Cup start in Wisla.

Thanks to all of you in advance for keeping your fingers crossed in the upcoming season and a nice start into the winter,