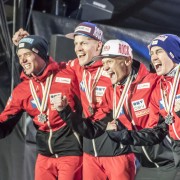 The preparations for the Home-WCS weren’t an easy thing for me. They were characterized from many ups and downs and clearly with the related emotions as well. Nevertheless, I was really looking forward to a huge, spectacular event. A “Home-WCS” you don’t often experience as a sportsman – or in other words – just one single time.

Packed with motivation I started into the WCS. Travelling there, press conferences in advance, and the ambience in Seefeld raised the mood and triggered additional emotions and joy. We all were more than excited and couldn’t wait to perform in front of the home crowd.

With the Single event on the big hill in the “bowl of Bergisel” there was a “blockbuster” on the schedule to kick off the WCS. My jumps were neither good nor bad –  at the end I finished on P14 – an important step into a more consistent performance.

The second Medal decision was a really emotional one for all of us – the Team Event on the Bergisel Jumping Hill. Just the fact naming those three words together – Home-WCS, Bergisel and Team-Event – is something really special for a ski jumper. The Event hardly couldn’t go better for us, and we started really well. In the final run, with Krafti as our “last man sitting” up there at the hill – things couldn’t have been more dramatic. Krafti did a great jump and in the end we celebrated the silver medal. This medal, with the hole team, on Bergisel, at the “Home-WCS” was an absolute Highlight throughout my whole career. This medal for me shined like gold one.

With the Event on the normal hill in Seefeld I was really satisfied. The conditions were though, but my jumps were solid, and I was able to finish on P9 – a good top ten result which I was really happy with.

For sure everyone come to WCS to fight for Medals and to win. For me it was clear that I’m not a medal favourite, but I wanted to give it all I had, fight and try everything possible.

At the End I’m looking back on many great moments and impressions of the WCS in Seefeld. It was a WCS with an atmosphere which couldn’t have been any better. Additionally, winning a medal with the team on the Bergisel in front of family, friends and fans – that something really special for me.

For the team and me the next thing on our agenda is the Raw-Air-Tour in Norway. Though schedule but unbelievable atmosphere as well – I’m looking forward to it.

Thanks for crossing fingers for me – we will “read” from me.