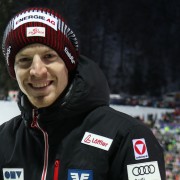 Granted, the last season always had kind of the one and the other tricky situation for me and put me in front of a few challenges.

Never the less the last season was beside the Olympics once more a very special one and brought me further step by step in personal and sports matters.

Smaller injuries regularly threw me back and made things not that easy going so to say. And these constants up and downs were kind of a special “season-companion” during the last season 😉 Never the less I look back to a season, where I did a good development and was able to increase step by step.

Even I wasn’t able to catch a medal at the Olympics in South Korea it was great for me to be in best season shape punctual to the Olympic Games. With a 6 place I had one of the best season results this year. At the raw feelings were a bit mixed but also with great moments. As for example to stand on the podium together with my long-time friend and roommate Stefan Kraft. That we managed to do so this year in such a difficult season, was really kind of a surprise.

„Just-in-time“ for Planica I was ill and therefore I had to watch the first jumps of my colleagues from the sofa at home. There I recognized once more, that I’m definitely not the guy “watch” but a lot more to jump myself … 😉

The upcoming days I’ll fill my batteries up again, will do a few days relaxing at home before we start to train again at the end of April.

I would just like to say thank you for your support during the whole season and all the kind messages.