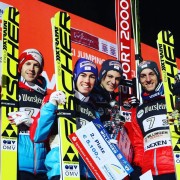 The 4 Hills Tournament already lies some weeks behind us and we are back in the “daily world cup routine”. I’m satisfied with my performance during the last weeks, although I haven’t reached the level I had before my back injury and my illness during the 4 Hills Tournament. Nevertheless I was able to jump constantly into the Top-10.

Really cool is our team performance. Especially this weekend in Willingen with a 2nd place in the team competition on Saturday and in a group of four in the top seven on Sunday. That is really great and it just is so much fun.

This weekend we finally have our first ski flying competition. I’m very much looking forward to the new hill in Oberstdorf. Afterwards we’re heading to Japan and the hill of the Olympic Games 2018 in PyeongChang, before we’ll have the World Championships in Lahti on our schedule. So there are lying very exciting weeks before us.

So, keep your fingers crossed! 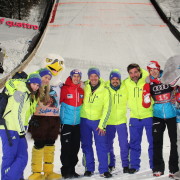 Now, that was a 4 Hills Tournament with crazy ups and downs –after which I really had to rest for one, two days!

After the amazing start in Oberstdorf with the 3rd place and Krafti’s victory, I hadn’t such an easy time jumping in Garmisch. Nevertheless I was satisfied with the result after 2 out of 4 stations. Especially our team performance was really great!

But then we had very tough luck. I and also some others of our team got a gastrointestinal virus, and therefore I wasn’t able to jump at the legendary Bergisel in Innsbruck. Instead I had to stay in bed and get as much sleep as possible.

Eventually I was at least able to jump again in Bischofshofen, although I was still really striken by the virus. The fact that nevertheless I could jump on the podium again is just crazy and amazing at the same time, so a cool ending of a turbulent 4 Hills Tournament. Congrats to Kamil for a definitely deserved victory and also to Daniel, who just also had tough luck!!

And very important: Thanks to all the fans who came to the hills!! You made this tournament again so special and unique!!

On Thursday we head to our next world cup station Wisla. That means regenerating and then “full speed ahead”.