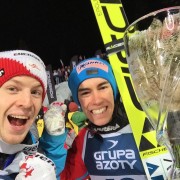 A really cool weekend lies behind me. First the second place in the team competition on Saturday and then another second place in the single competition behind my “room buddy” Kraftl on Sunday – and all in front of this amazing crowd!! I’m so delighted to see that we, as a team, can compete about the foremost places and that I can contribute my part to the success. Furthermore it was the fifth single podium for me this season. It can go on like that. 😉

But before it will go on for me, I will take a short break from the world cup and therefore skip the competitions in Japan. Of course I would like to take part in Sapporo and the people there would have earned it that all top athletes participate in Japan but due to the fact that I was a little bit in frail health in the last time it is simply common sense to take a break.
Actually it was already pretty clear at first sight that you can’t really pull through the whole world cup calendar. Although I’m curious whether someone will try to do it and how this will come to an end. Meanwhile my program will be some relaxation and training at home.

In a little more than a week, I will be back at the world cup in Oslo to which I’m already looking forward to.

It’s like blow upon blow at the moment. Just jumping at the 4 Hills Tournament, then Willingen last weekend and tomorrow already the qualification for the Ski Flying World Championships. Not much time to catch a breath. On the other side these are really exciting and cool weeks.

The 4 Hills Tournament went also this year very well for me. I was able to jump in the TOP-5 at all four stations, 2x on the podium and third place in the overall competition behind Severin Freund und Peter Prevc, who just was unbeatable during the tournament. Congrats! Not least because of this I’m very satisfied with the result, although there is still some potential to improve.

And this potential is exactly what I want to recall at the Ski Flying World Championships at the Kulm because my goal at this weekend is to take part in the fight about the medals. Furthermore I’m looking forward to all the fans at the hill. To have the privilege to jump towards all these flags is an indescribable feeling. The Kulm is also something very special to me personally because it was the place where I saw on the shoulders of my dad how Andreas Goldberger won the title in 1996.

In this sense, keep your fingers crossed! 😉